2022 REPORT: October 2021 Submissions to the COVID-19 Public Health Response Amendment Bill (No 2). Were the public misled?

The first reading of the COVID-19 Public Health Response Amendment Bill (No 2) occurred September 29, 2021. Its content strengthened controls and increased penalties. The public were granted 11 days to submit to this legislation with the submission deadline October 11.

In that 11 day period, 14,626 interested groups and individuals submitted.

The Amendment Bill referred to vaccines in 6 instances, and never in relation to mandates and extending vaccines to broader populations.

Yet the PSGR and many of the thousands of public submissions suspected that tightened provisions would include in some measure, coercive measures that might require broadscale take-up of the novel technology. As such, the PSGR and others in many instances, referred to the scientific literature which demonstrated that the mRNA gene therapy vaccines not only were harmful, but could wane and result in breakthrough infection.

For all intents and purposes as the PSGR's submission and that of others demonstrates, the mRNA vaccines, as of October 2021, were neither safe nor effective.

However, as vaccines and mandates were not referred to in this Bill, public comment on this would have been viewed as 'out of scope' and therefore irrelevant to the Bill in front of the Select Committee.

Yet principles of public law require that public officials consider all relevant considerations in the process of developing laws and regulations. The Cabinet Manual requires that Ministers consider controversial information, and requires that consideration includes the necessary protection of rights, stating that the:

‘Attorney-General is required to draw to the attention of the House any bill that appears to be inconsistent with the rights and freedoms contained in the New Zealand Bill of Rights Act.’

The public, in submitting to Amendment Bill (No.2) - could observe that by 11-15 October 2021, when they were submitting and making oral presentations to the Select Committee, that the Act had been changed only rarely since the overnight legislation the original Act was introduced. This Minister in charge of introducing the COVID-19 Public Health Response Act, is also the Attorney-General of New Zealand, the Hon David Parker.

The Amendment Bill (No.2) that the public were submitting to, limited mention of vaccines to 6 instances. This was the knowledge held by the public. In the 20th November version of the COVID-19 Response Act, that followed this consultation for the amending Bill, vaccine/vaccination was not mentioned at all.

Yet submissions to the Amendment Bill, including the PSGR's October 11, 2021 submission, repeatedly referred to the doubtful safety and efficacy of the new mRNA genetic vaccine which had not completed full safety trials, and for which the scientific literature was already presenting a safety and efficacy profile.

As it appeared likely, based on evidence from countries that had rolled out vaccination earlier than New Zealand, that governments would push for widespread acceptance of the novel technology, even though risk of severe COVID-19 was located in the elderly and in those with severe multimorbid health conditions, which impacted their immune statues.

However it appears that legislation requiring submission of the population to widespread mRNA vaccination, occurred strategically through legislation that was being designed and drafted in the same weeks as consultation. The vaccination legislation was closely tied to the Amendment Bill (no.2) - yet in no way, were the public permitted to consult on this policy.  Therefore by separating the Amendment Bill (No.2) from the Vaccinations Bill - the government could prima facie consult, while simultaneously excluding consultation that the government viewed as politically problematic to the carrying out of their stated, predetermined policy of high vaccine take-up. This policy was signalled by signing a contract for population level mRNA gene therapy vaccination, even as the scientific evidence pointed to the fact that only the elderly and infirm were at risk of COVID-19 following infection by SARS-CoV-2.

Hearing of evidence occurred October 15. The speed at which this occurred was considered to be unprecedented.

Most oral submitters opposed the Bill, and many recognised the fact that the consequent legislation would adversely impact Māori communities.

Following the consultation, the government produced two reports : a Commentary released by the Select Committee (undated) which included discussion of any changes to the Bill following consultation and a (B) report authored by the Ministry of Health and the Ministry for Business, Innovation and Employment.

On page 3, the Commentary noted that the Select Committee

'received and considered submissions from 14,626 interested groups and individuals.' 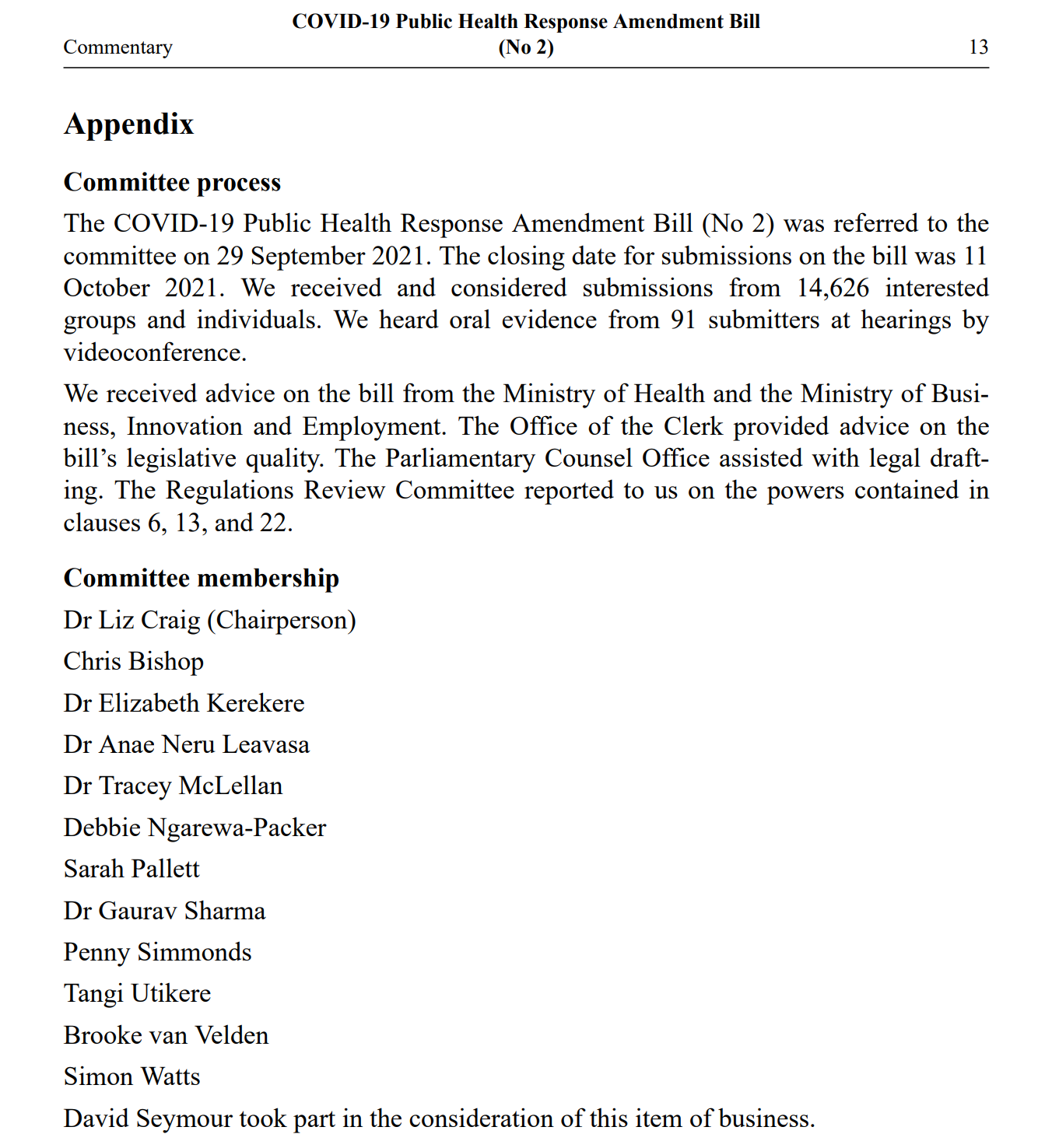 'Please provide all reports supplied to you as Minister for COVID-19 Response from the Committee Secretariat, the Health Committee, including Members of Parliament involved in the consultation, or other bodies tasked with collating this information and supplying with you with information... This includes all summaries, all data analysis including spreadsheets, appendices and reports.'

No spreadsheets, appendices or reports seeking to weigh and understand the tenet or timbre of public support or concern for the Bill were released. As a response to the request, the office of the Hon Ayesha Verrall identified one document, a Departmental Report.

Very few recommendations from the public were discussed or included in the Departmental Report.

It is unclear whether the practical, ethical and scientific observations of the 14,626 submitters were considered in any meaningful way, so that the public might be assured that the New Zealand Government meaningfully took into consideration the perspectives of the public.

The question of course is, just how many people advised the Government, the Ministries and agencies, that the mRNA gene therapy was risky, it waned, it was susceptible to breakthrough, and it increased the risk of future variants - before the traffic light system was deliberately dialled up in November to drive people towards vaccination.

An October 18 2021 Cabinet document identifies the shift from an elimination strategy to a 'minimise COVID-19 strategy' - however the chief goal was to maximise vaccination.  The Cabinet document did not assess early treatments as a way to prevent hospitalisation and disease, nor acknowledge that people were not at risk of severe disease.

As Michael Baker acknowledged in January 2022:

“The traffic light system won’t help us very much because it was never designed to dampen down transmission, it was only designed to nudge people towards vaccination,”

PSGR's presentation to the Select Committee was on October 15, 2022. As the Parliamentary website states the Second Reading occurred the day after, with Royal Assent granted on October 19, 2022. 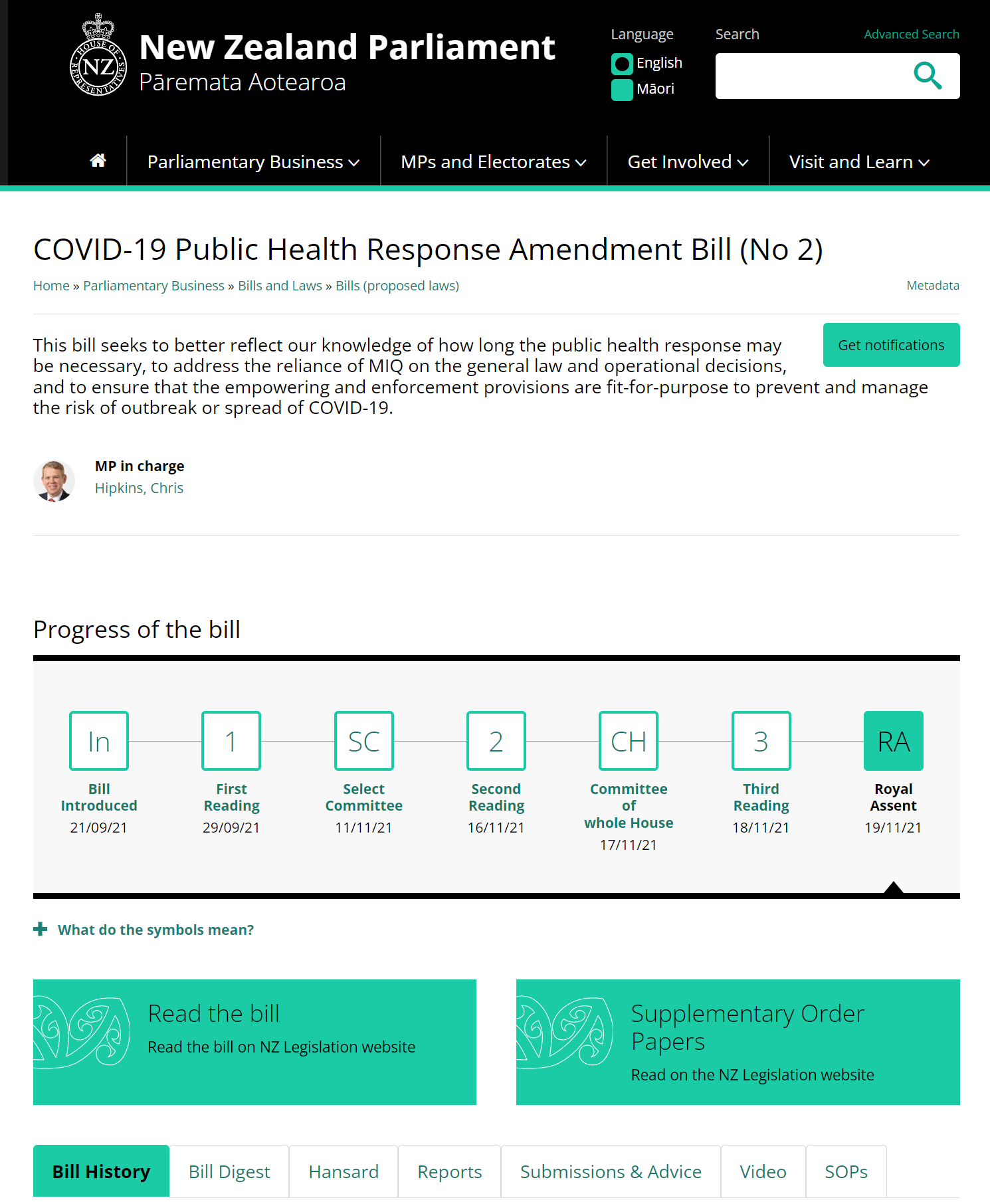 What may have been more egregious was the quiet and quick passing on the COVID-19 Response (Vaccinations) Legislation Bill, on November 23, 2021.

However the public were largely unaware of the Hon Chris Hipkins COVID-19 Public Health Response (Vaccinations) Order 2021, also produced on 20th November. The Order by then, referred to vaccines 299 times. These Vaccinations Orders were and are frequently reviewed and updated, outside of parliamentary scrutiny. When the public were submitting to the Amendment (No.2) Act, the October 17 version of the COVID-19 Public Health Response (Vaccinations) Order 2021, mentioned vaccin/vaccination 147 times. Therefore, by the time the Amendment Bill (No.2) was enacted in law, the partner legislation, the Vaccinations Orders, had also rapidly increased the scale and technical rule making relating to compulsory vaccination.

The Hon Chris Hipkins COVID-19 Response (Vaccinations) Legislation Act 2021 received Royal Assent on 25 November. By the following day, Sunday 26 November 2021, this new Act that was secretly passed on a Saturday, was integrated into the 26th November version of the COVID-19 Public Health Response Act.

This 26th November version locked in the requirement for a vaccination certificate to be presented for access to premises, resources and activities. 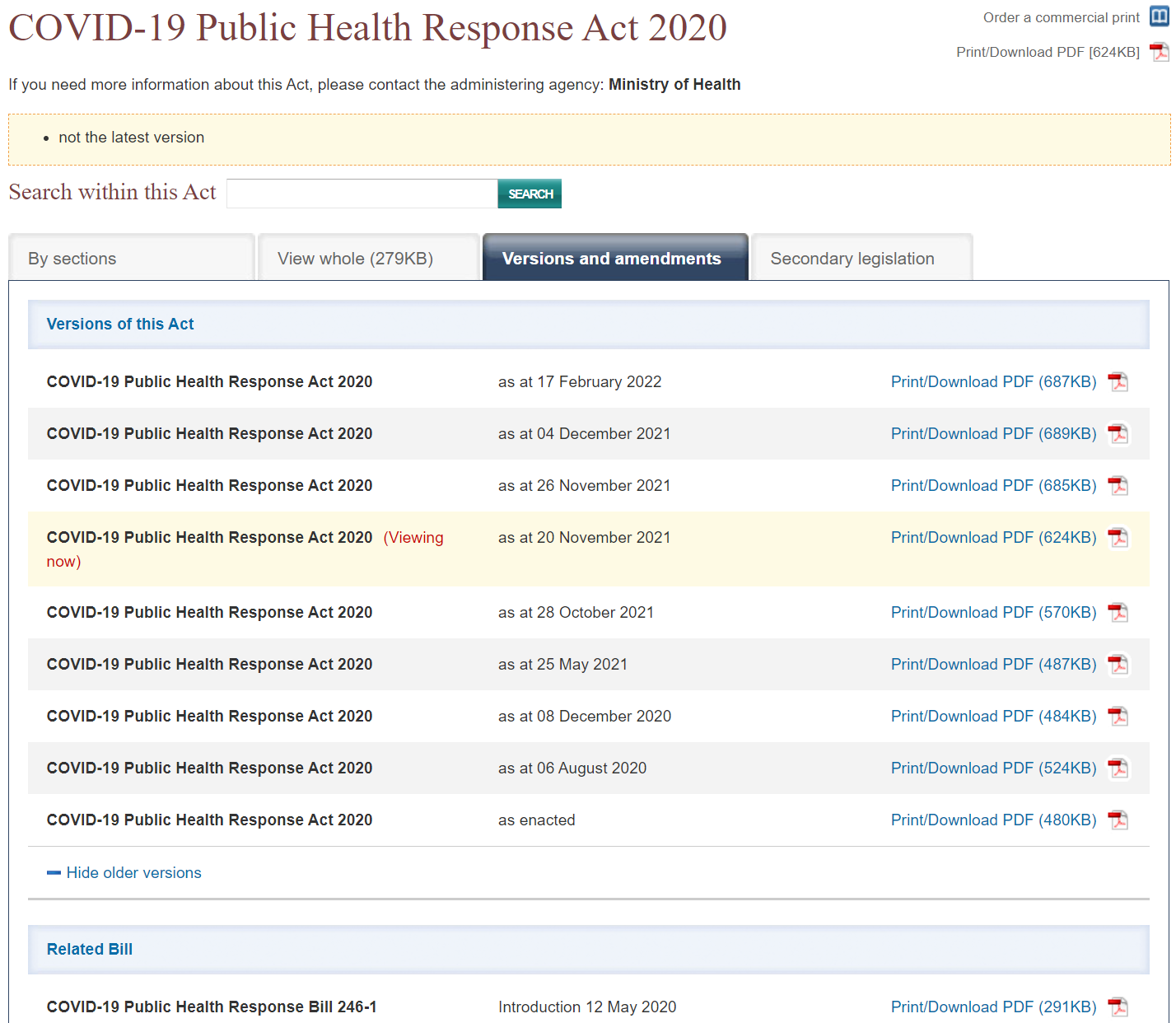 In addition to the Amendment Bill, the Hon Chris Hipkins was also the Minister in charge of the COVID-19 Response (Vaccinations) Legislation Bill was introduced November 23, 2022.

The Bills Digest contains no reports or impact statements.

The Attorney-General did not release a report discussing whether this legislation was consistent with the rights and freedoms contained in the Bill of Rights Act.

On Saturday 23 November - the Bill was introduced, and subsequently passed 3 readings and was debated on by the Committee of the Whole House. The Bill received Royal Assent two days later.

The New Zealand public were not aware of this legislation. Only after the Bill was passed did the public become aware, with Stuff reporting at 8pm that same evening:

The Government is urgently passing legislation that will seriously curb the freedoms of the unvaccinated without conventional parliamentary scrutiny, so that the bill can become law for Auckland’s reopening on December 3. Opposition MPs, legal experts, and the Human Rights Commission have all condemned the move as poor lawmaking.

The Minister in charge of the COVID-19 Amendment Bill (No.2) and the Vaccinations Legislation Bill, the Hon Chris Hipkins, is leader of the House, and has occupied this position since 2017. 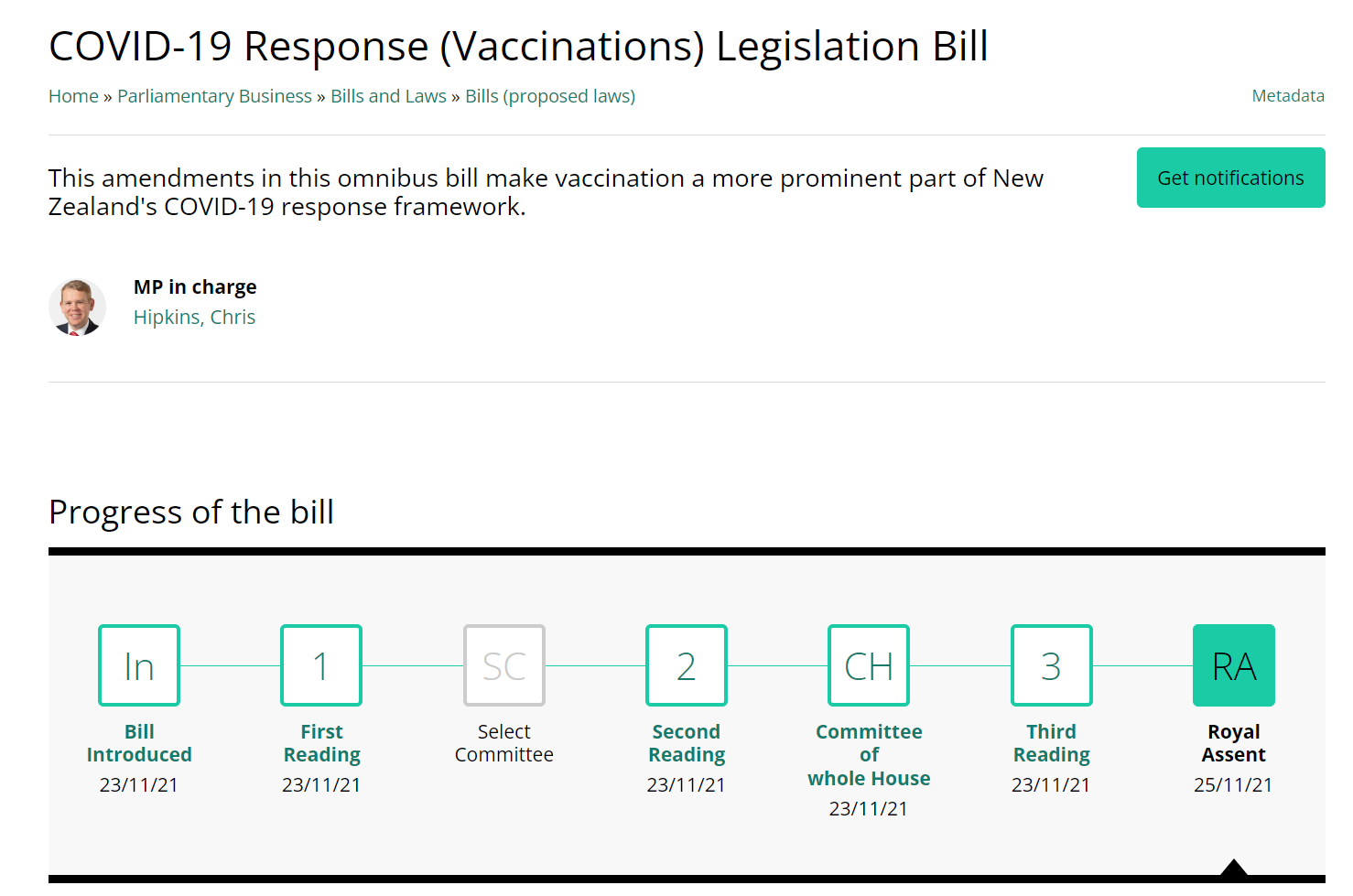 The Hon Chris Hipkins is not required to answer Official Information Act requests from this time, as once a Minister is no longer responsible for a portfolio, they are no longer required by law to answer OIA requests relating to their decision-making from their time as Minister over a particular portfolio. They therefore transfer the request to the current responsible Minister, who was not involved in the decision-making, and who has a different email address.

The PSGR draws attention to this timeline as the PSGR considers that the processes above have distorted the democratic process, but have resulted in excluding much consultation and debate relating to the safety and efficacy of the mRNA gene therapy from robust public debate. As the Hon Chris Hipkins was not only responsible for the Amendment Bill (No.2), but the vaccinations Orders that were being enacted at the same time, as well as COVID-19 Response (Vaccinations) Legislation Bill - the Minister for COVID-19 Response was acutely aware that coercive legislation was in the pipeline and ready to be deployed within weeks.

The departmental report following the 14,626 submissions demonstrates little interest in the scale of public concern that was registered through the submission process. It is also well recognised that the legacy media demonstrated little interest in scientific evidence drawing attention to the safety and efficacy of the injectable product that diverted from messages coming out of the relevant Ministries and departments.

For twenty years, the PSGR have been drawing attention to systemic policy and regulatory problems when modern technologies (novel entities) which include biotechnologies, are under-regulated and/or regulated through the application of outdated guidelines which fail to keep up with the pace and scale of technology development.  Legal loopholes including outdated legislation stymy regulatory processes which then lag in promoting and protecting public safety; and in particular the health of pregnant mothers and young children.

The PSGR are concerned that in the case of the safety and efficacy of mRNA gene therapies and the processes that resulted in prima facie coercive legislation that required the majority of the population to submit to a novel technology, that the New Zealand government may have exceeded its' powers.

The product: a nucleoside-modified messenger RNA encoding the SARS-CoV-2 S-glycoprotein intended to provide immunisation against COVID-19 caused by the virus, SARS-Cov-2.

The RNA-based vaccine encodes a viral antigen which is expressed by the vaccine recipient and can elicit protective immune responses. Unlike live attenuated vaccines, RNA vaccines do not carry risks associated with infection. RNA-based vaccines are manufactured by a cell-free in vitro transcription process, which allows easy and rapid production and the prospect of producing high numbers of vaccine doses within a shorter time period than could be traditionally achieved with conventional vaccine approaches.